Review: Rainbows in the Mud by Paul Maunder 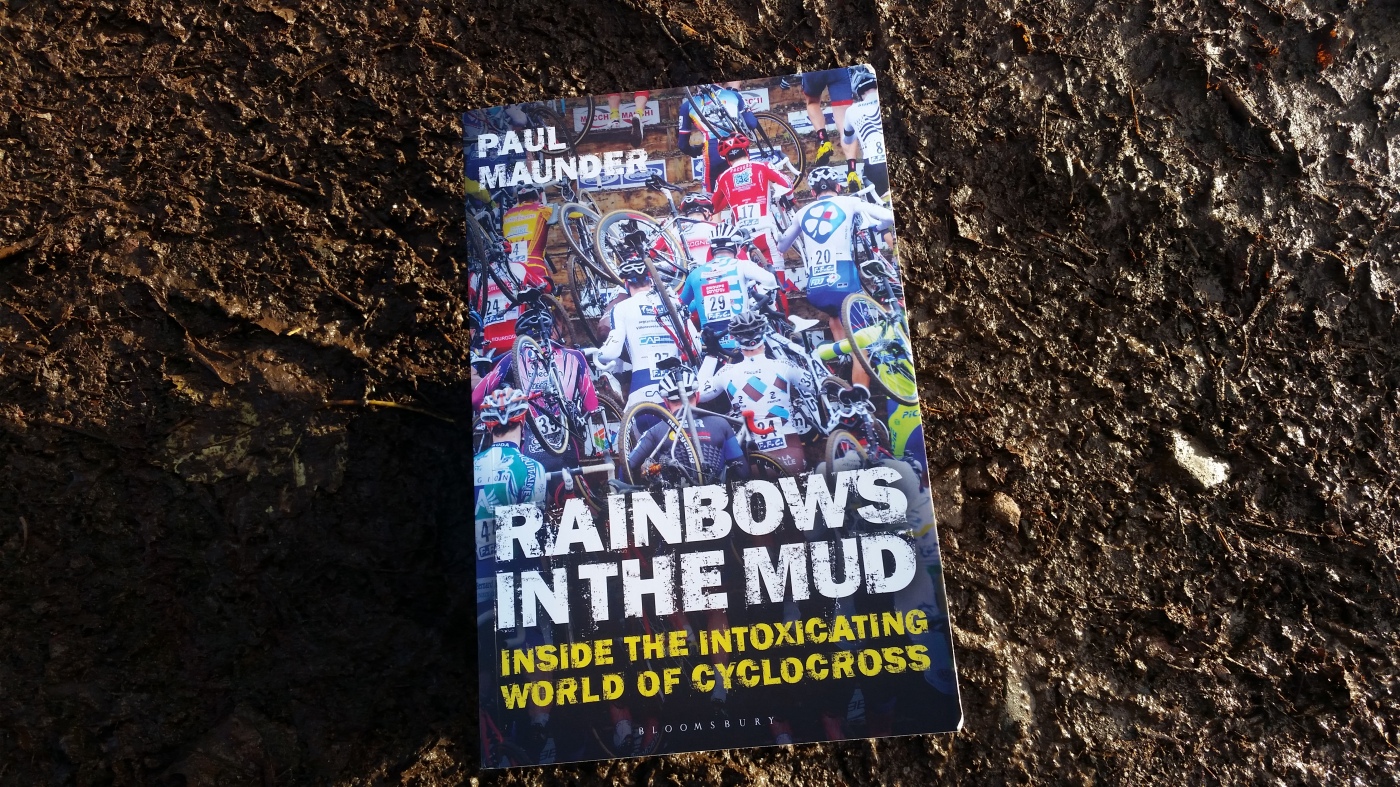 What I knew about cyclocross before reading this book:

Cyclocross is a branch of cycling I have appreciated from a safe distance but known little about. I’ll occasionally watch a race on Eurosport but don’t follow the season — even cycling fans need an off-season, a few months of the year without races to watch on the TV, distracting from the more important things in life, like actually cycling. Besides, I follow the NFL in the winter, and there’s only so much sport any semi-sane person can take.

I’ve always viewed cyclocross as an eccentric, niche discipline. It’s raced on bikes that almost look like normal road bikes, but the courses are a variation on a muddy field. And there’s a lot of running involved, so it’s not strictly cycling. Is it?

I picked up Rainbows in the Mud with a deal of interest, keen for insight into this weird winter world. Maunders isn’t a ‘cross competitor (not since an under 12s event in an Oxford farm back in his day), he’s a fan keen to share a passion and hopefully draw the reader in to a world that’s recently begun to garner a wider audience (beyond its Belgian heartlands).

As Maunder puts it, cyclocross has gone from being a ‘gateway drug’, a cycling starting-point that might lead into competing at ‘mainstream’ disciplines, to many people’s main event.

Of course, for Belgians it has always been so. ‘Cross is as popular over there as football, the fans more passionate than those on any terraces, and a deal more deranged. Theirs a a madcap carnival world of mud, beer and frites.

“By the time the elite men’s race is underway the beer stalls are starting to claim some casualties. While Sven, Wout and the others slide past through the S-bends, a group of young men are running at each other, pint glasses in hand and crashing to the floor. There they start wrestling. Fingers are hooked through belt loops, palms shoved into faces, beer spilt on jackets. The wrestlers grunt and laugh, their friends cheer.”

And there’s a symbiosis between race and spectators: “Debauchery and indulgence contrasting with sobriety and penitence? That sounds like a Belgian bike race.”

Not that the Belgian racers have always been particularly sober or penitent. Enter Eric De Vlaeminck, top Belgian rider in the early 1970s and the sport’s first superstar. His personal life sounds as clean as a ‘crosser’s bike after an hour in the mud. Apparently, Eric spent all of his salary and winnings on amphetamines, and in 1973 was sent to prison for falsifying a doctor’s prescription, and involvement in a hit-and-run.

Cyclocross is no cake-walk, not a discipline for the naturally timid, for those unprepared to take a few risks and accept a heavy dose of discomfort. Maunders compares it cage-fighting, describing it as, “visceral, physical, brutal.” But for him it’s the intellectual aspect that sets it above the sheer brutality of a blood sport:

“It exercises the grey matter. A rider must always be thinking, plotting, calculating. Staying upright is to a large degree a matter of instinct and learned skill. Going fast, whilst staying upright, is a much more complicated proposition. Which line to take? When to dismount and remount? Which gear to use? Which tyres and at what pressure? Stay in the group or push on alone? The questions are endless. Perhaps that’s why there are so many people riding cyclocross well into their sixties and seventies, because it’s forever challenging them, a puzzle that is never finished.”

To me, that brutal aspect of ‘cross has always been all too obvious — riding at threshold for an hour, your eyes about to pop from your skull? Think I’ll pass. Maunder is honest and up-front about the sport’s hardships, but equally keen to revel in the magic.

“The joy of riding a cyclocross bike lies in the necessity of combining pure fitness with the challenge of clearing obstacles. On a good day, the endorphins will be flowing through your body, and your wheels will be flowing through the mud. On a bad day, your lungs will feel as if they’re going to pop, and everywhere you point your front wheel it gets stuck.”

It’s a sport of yin and yang. You can’t have the fun without mud, win without pain, or eat frites without mayo. As Maunders says, to be really good at it requires “a Zen state, unattainable for all but a handful of riders“.

For the rest of us, “the more realistic objective is about minimising the damage of your mistakes, getting back in there and exploiting and exploiting any opportunities afforded by others’ errors.”

And if all that sounds like too much hard work there’s always spectating, beer, frites and the carnival atmosphere that colours a rainbow through the bleak and muddy midwinter. I might not be about to try my hand at racing but I might need to free up some space in my TV schedule.

Get some mayo on those fries, fill the living room with mud, and crack open the beers, there’s ‘cross on the tele!

Rainbows in the Mud is published by Bloomsbury.