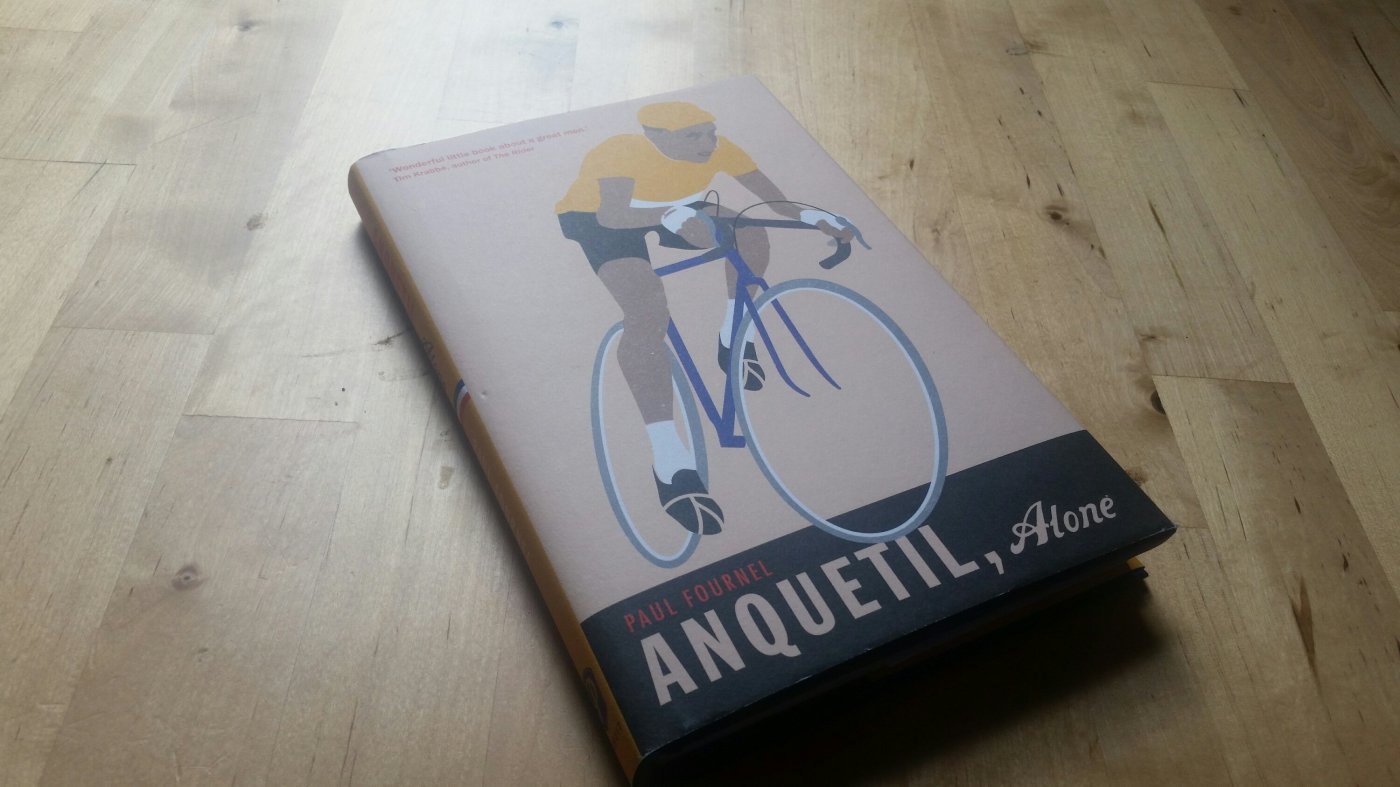 Anquetil, Alone may not be the most comprehensive history of the first rider to win five Tours de France but if there’s one better written I’ll eat my chapeau.

To Maître Jacques in a minute. First, the author: Paul Fournel is a French writer, poet, publisher, and cultural ambassador. A few years back I stumbled upon his 2001 collection of essays on cycling, Need For The Bike (Besoin de vélo, in its original French). If you’re a cyclist and haven’t read it then do yourself a favour, open a new tab in your browser and order a copy. Now. Fournel may not have been the best cyclist ever (he describes his own two-wheeled talent as banal) but there’s no one who writes better about the sport.

Not just a cycling fan, throughout his childhood Fournel held Anquetil in the highest regard, and reading Anquetil, Alone you can tell. It would surely be impossible to write that well about a subject for which you had no passion. Anquetil’s palmares demonstates greatness in abundance (five victories at the Tour, two at the Giro, one at the Vuelta, etc, etc) but the way Fournel writes about cycling he could turn the career of Tejay Van Garderen into a literary epic.

“I’m hurting. The nape of my neck, shoulders, kidneys, and then there’s the hell of buttocks and thighs. You have to resist the burning sensation, the knotted muscles, the stabbing pain that returns with every turn of the pedal, be alert to the instant where there’s a risk of paralysing cramp setting in. Resist the lead that is added to your muscles every quarter of an hour of the race. Keep your mind clear to make sure the movement is always complete: push, pull, lift, slam down, never forget to make the roundest circle. … Don’t listen to the body and head telling you this has to stop right now. Pedal in a world of pain of which only I know the secret, and convince myself that if I’m suffering so much it’s impossible for the others to keep up.”

Enough gushing over Fournel and on to the subject of his prose. I knew a bit, but not a lot, about Anquetil before reading this book. Here’s a little of what I learnt:

– Anquetil won so often that occasionally race organisers paid him not to win. As was the case one year at the Grand Prix de Lugano, where Anquetil accepted a payment not to win, but couldn’t resist and won anyway.

– Anquetil’s motivation most likely wasn’t a love of the bike. After retiring from racing he only returned to the saddle three times. One of those three was on the insistence of his daughter, Sophie, who’d only seen him ride in photographs. As a birthday treat to her he rode his bike across the garden and straight into their swimming pool.

– Despite his success, Anquetil was not universally adored by the French public, proving far less popular than his dogged but Tour-unsuccessful rival Raymond ‘The Eternal Second’ Poulidor:

“He is somebody it’s so easy to admire but so hard to love.” Writes Fournel. “Worse still, the more he proves his excellence, demonstrates his superiority, the more he pedals like nobody else, the more popular Poulidor becomes.”

– Anquetil doped and was open about it, saying so publicly in Equipe:

“You have to be an imbecile or a hypocrite to think that a professional cyclist who races 235 days a year can keep going without stimulants.”

One year at the Grand Prix de Forli time trial Anquetil and Ercole Baldini decided to test that imbecilic, hypocritical idea and raced the event on mineral water alone. They finished first and second but were physically and mentally spent, and their average speed was 1.5 kph less than previous years. They vowed never to repeat the madness.

– Anquetil doped his goldfish, just to see what it would do.

– Anquetil had his only victory at La Doyenne, Liege Bastogne Liege, scratched for refusing to take a dope test.

– Behind every great man there is a great woman, and Anquetil was no exception. In his case it was Janine. Eight years older than Jacques, Nanou, as she was affectionately known, was the ex wife of his one-time mentor and doctor. She was no ‘mere’ wife, acting as organiser, fixer, trainer, manager, and providing physical and emotional support. She was also Anquetil’s driver, covering 100,000 km a year ferrying her man to events across the continent, often doping herself on Corydrane in order to stay awake and drive through the night.

– Anquetil was superstitious. Before each Tour he would spend time with a ‘healer’. His favourite was Jean-Louis Noyes a healer and ‘magnetiser’, whose wife was also a fortune teller.

– In his retirement role as a TV commentator, Anquetil interviewed Eddy Merckx directly after his successful attempt on the hour record. Asked how he felt by Anquetil, Merckx, unable to sit down for the pain, could only reply, “it hurts”. In place of sympathy, Anquetil castigated the Cannibal, calling him a blockhead for not having properly prepared for the event.

– Anquetil had a daughter, Sophie, with his step-daughter Annie (his wife Janine’s eldest child), and apparently with his wife’s consent. The presumption amongst the public was that Janine was the mother, but the truth was revealed years later by Sophie in her autobiography Pour L’Amour de Jacques.

There’s a lot more to the man, and a lot more in the book. Even if (for some daft reason) you’ve no interest in Anquetil, the writing alone makes this book a cyclist’s must read. Add it to your list. 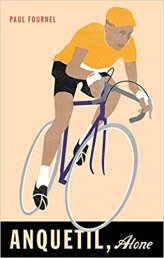 One thought on “Review: Anquetil, Alone by Paul Fournel”