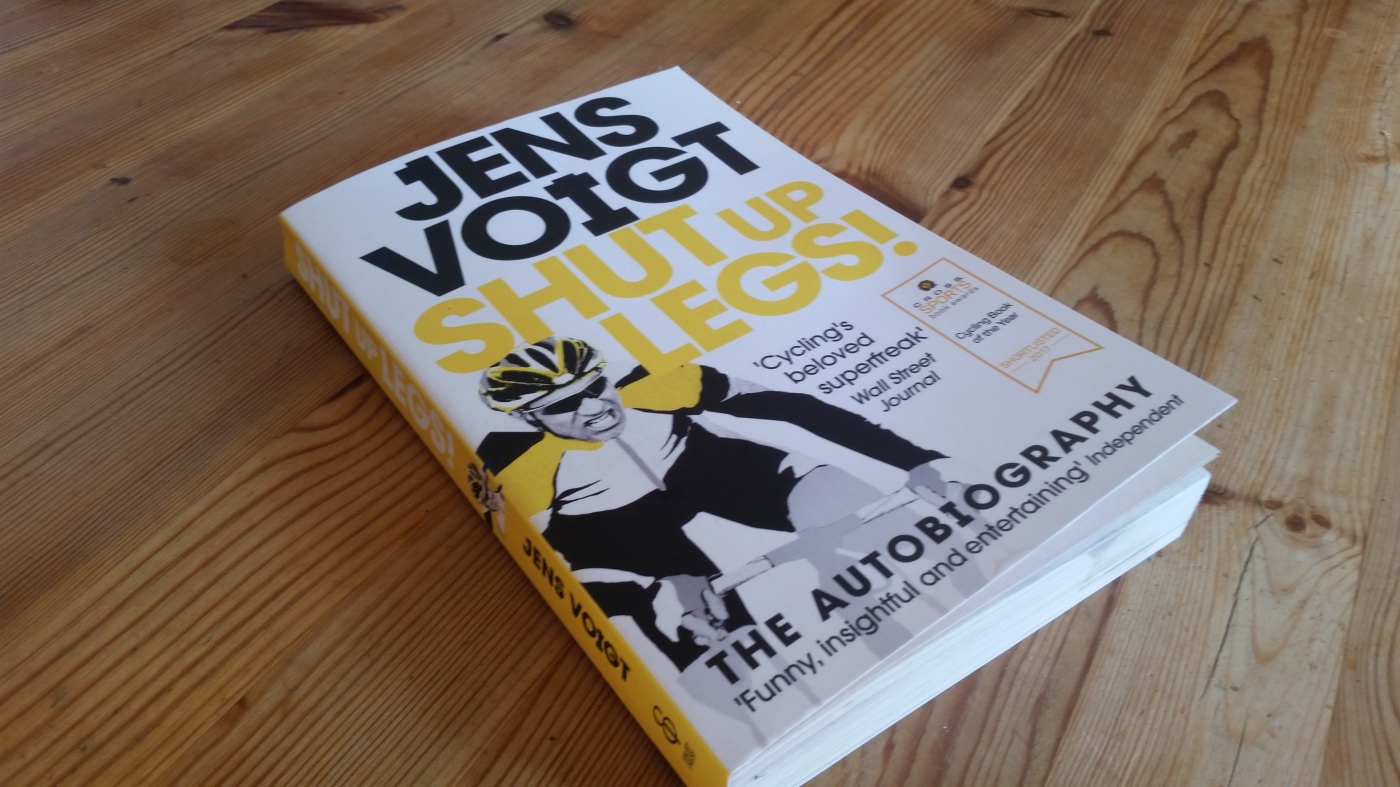 Voigt had a long, successful career with a palmares that most domestiques (that’s mostly the role he played) would kill (their team leader) for: two Tour de France stages, wore the yellow jersey twice, five-times winner of Criterium International, won the Deutschland Tour, Tour Méditerranéen, plus various other stage wins and podiums, and he broke the Hour Record on the track.

But forget the bike for a sec’. Voigt grew up in Dassow in the former East Germany and it’s this part of his story I found most interesting. He, and his fellow East Germans lived, what Voigt describes as a simple life under the old communist regime, one that he asserts prepared him well for a career as a professional cyclist ─ the hardships, the work ethic, pulling together for the good of the collective (country/team), etc.

He tells of his father’s time working as a border guard and the nightly threat of being shot in the back by his comrade patroller. We hear of his grandmother’s often vocal dislike of the communist system – working hard on her farm despite having had most of her equipment seized by the state. He touches upon his own experiences in the regime-run sports school, turning his TV and radio antenna towards the West, the shock of the new and the seemingly unlimited choice, and expense, of goods when the Berlin Wall finally fell.

Back to the cycling and it’s this part of Voigt’s story I found a little less interesting. Just 24 pages in to Shut Up, Voigt states that he used his voracious appetite for reading as an escape from the fatigue of racing and the boredom of time on the road, and that so absorbed was he in the exploits of fictional characters that he can’t actually remember all that much about his own real-world travails. It’s an anecdote that tells us a lot about the man and something of what lies ahead in the book.

In Shut Up Legs! there are no great secrets spilled, no hitherto untold stories or detailed insights to races past, and as a result I found it all just a bit too perfunctory.

I perhaps read too much into Voigt’s assertion of a lacking memory, seeing it as a veiled excuse for the lack of doping-related revelation that’s often used to sell books by riders from a certain era. He turned pro in 1997, rode on the French GAN team in the infamous 1998 ‘Festina’ Tour de France, at the height of the EPO era, and yet Voigt, presumably too absorbed in his books, saw and heard nothing worth noting. He was teammates, and is still good friends with, Frank Schleck, the Luxembourger who reportedly paid the blood-doping Dr Fuentes 7,000 Euros ‘for training advice’.

But even supposing he had remembered more, Voigt doesn’t seem like the kind of guy to betray former teammates or create controversy where previously there was none. And it’s not that he avoids the d-word. He’s pretty effusive in his condemnation: “Doping just isn’t right. Doping is dangerous. Doping is unhealthy. Doping just destroys everything!”

He’s also critical of former teammate, the Italian, Ivan Basso, who was banned for two years by the UCI for paying Dr Fuentes for more than just training plans.

And it’s not just the juicy doping details that are lacking. The book is peppered with an overdose of exclamation marks, but there’s not really a whole lot here worth exclaiming. Just as Voigt forewarns, his racing memories are a little cursory, meaning there’s not a whole lot for the serious cycling fan to really sink their teeth into.

What we do learn is that Jens was (and still is) a hard-working, down-to-earth, self-deprecatingly humorous family man. From cold weather, to tough races, to struggling to compete with dopers, he rarely complained. Hardships became opportunities he somehow turned to his advantage. “Everything that’s sticky is good for me!” Was his motto, which was probably the only attitude a clean rider could have taken in order to survive riding through some of the dirtiest years in pro-cycling history.

“Jens, if you try to win you might lose. But if you don’t try to win, you’ll lose for sure,” was the advice he received from friend and former teammate, Chris Boardman, and there’s one thing for sure, good old Jensie sure was a trier. The breakaway, those long, seemingly suicidal escapades off the front of the bunch, became his forte, an attempt to capture the attention of fans and sponsors, and a means of standing out from a peloton where only those with the best doctors stood a chance of winning grand tours.

Voigt was an all-round good guy, a loyal teammate and a gutsy racer. It’s just a shame his memory isn’t a bit better.

Shut Up Legs! Is published by Ebury Press.

One thought on “Book Review – Shut Up Legs by Jens Voigt”