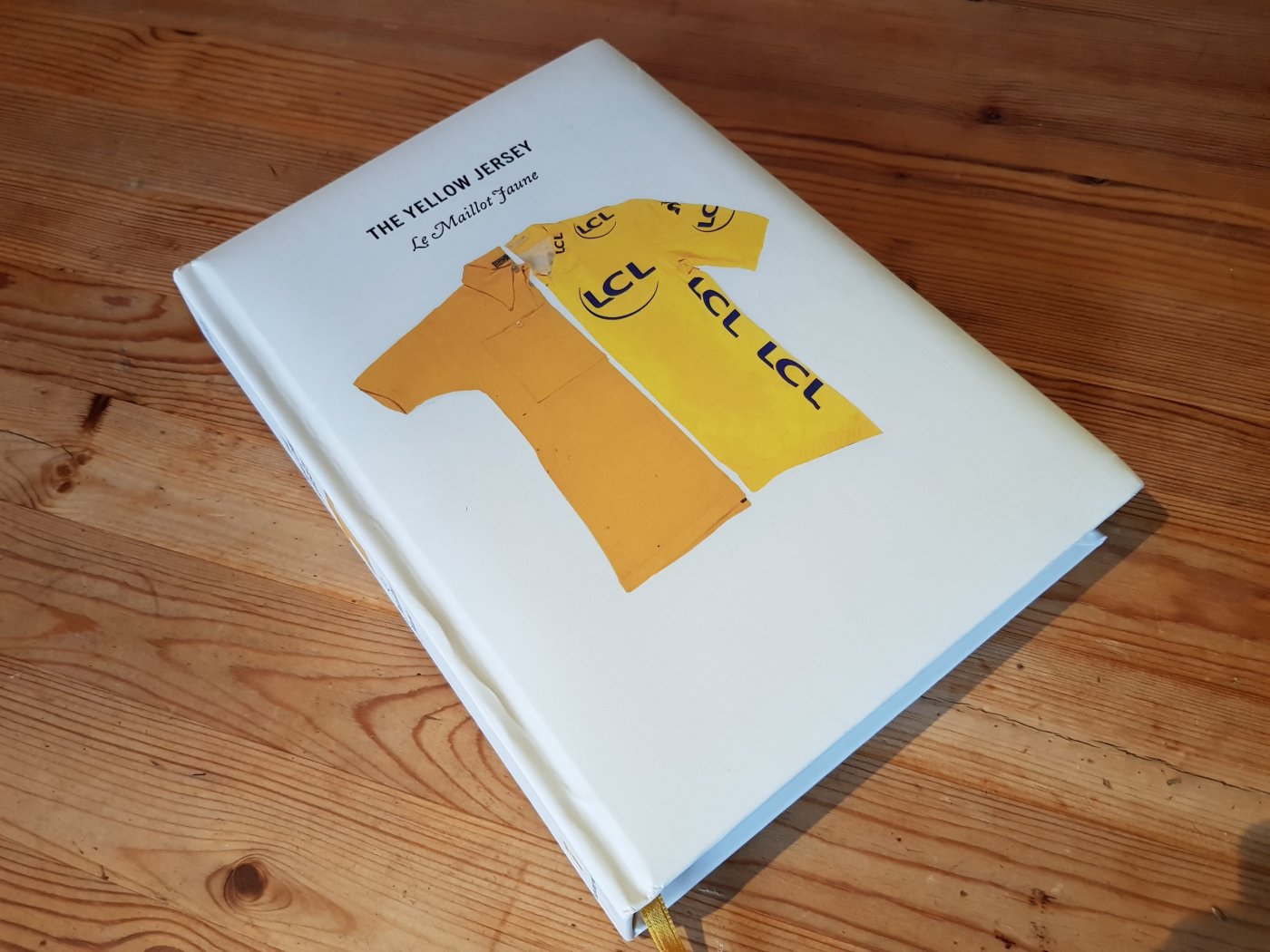 The Yellow Jersey by Peter Cossins is a fitting commemoration of the 100th anniversary of one of sport’s most iconic prizes.

Conceived, and first worn, in 1919 as a means of helping spectators at the roadside more easily identify the Tour’s leading cyclist, the maillot jaune is one of the most coveted prizes in the sport of cycling, only rivalled by the World Champ’s rainbow bands.

Cossins’ celebration of the jersey’s 100th anniversary is a history of its inception, an examination of what it means to the sport, and the wider world, and a look at the (mostly) men who have been lucky, strong, clever, and occasionally doped enough to wear it — from the one-offs to the five-timers, and the .

Judge a book by its cover

Not to be superficial, but boy is this a beautiful book. The jersey itself is a gorgeous object and it’s more than fitting that its century-commemoration should be a looker. It’s set out almost in a magazine style, with eye-catching typography, text laid out in columns, and packed with colour photos: of Tour promo material, riders referenced in the chapters, and exclusive shots of historic jerseys that illustrate how the colour yellow has brightened and faded, ebbed and flowed over the years — objects of art in their own right for all they represent, all it took to win them, the adulation and respect sent their way.

The Yellow Jersey is a book that makes me wish I had a coffee table on which to exhibit it, pride of place. In fact, forget a coffee table, it’s worthy of a plinth.

The colour of summer

Since its inception, the yellie ganzie (as us teutchters from the north-east of Scotland would say) has taken on a meaning all its own. As Cossins puts it, “The yellow jersey is the Tour de France, the two are interchangeable.”

It’s a garment that has coloured my own existence, my summers defined by the Tour, the colour yellow their theme. It brightens and warms even the wettest Scottish July, and when it fades from view at the end of the three weeks, the sun goes with it.

‘Yellow…is the colour of summer, of holidays, of happiness, of the Tour de France.’

For any rider in the pre-1980s era, a spell in the yellow jersey directly related to an increase in the appearance fees they could command at the lucrative post-Tour criteriums that heavily supplemented incomes.

And the effect persists into the modern era, riders’ prestige also rising exponentially.

‘When I had the French champion’s jersey, I thought to myself, “This is cool…everyone recognises me.” But once you take the yellow jersey that recognition rockets into the stratosphere.‘

And as the Italian, Rinaldo Nocentini, who led the 2009 Tour for just over a week, is quoted as saying:

‘People talk about the value of the yellow jersey, and I can confirm that it’s colossal. Everything I’ve done on a bike pales in comparison to those eight days.’

It’s not just a rider’s finances and prestige that are boosted by yellow. What Cossins calls the ‘exponential power of the maillot jaune‘ is the additional power it seems to bestow upon the wearer, even those without a realistic hope of keeping it to Paris. Back to Tommy V:

“It does allow you to transcend yourself, assuming that you’re prepared to defend your position tooth and nail…you don’t feel that you have the right to yield and, as a consequence, you can push your degree of suffering further than normal. It does give you wings.”

The book doesn’t just look at the winners, those who took the jersey all the way, there are the losers too — those who fought harder than mere mortals like me ever could, and still came up short. Riders like Eugene Christophe, dubbed ‘the glorious loser‘ by Tour founder Henri Desgrange, who lost the jersey on the penultimate day of the 1919 Tour.

And stories of heroic failure make the myth of the jersey as much as those of glory. As Cossins puts it: ‘the Tour relishes a drama, the chance to indulge in pathos….‘

There’s Raymond Poulidor, French star of the 1960s, dubbed ‘the glorious second‘ who recorded eight podium finishes but never once stood on the top step, his career defined, and ultimately boosted, by an inability to wrestle the jersey from the backs of his competitors (curses, Jacques Anquetil!) and the hands of fate. Not that Poupou seems bothered by that lacking:

‘If I’d worn the yellow jersey even for a single day I wouldn’t have been remembered in the same way.’

Cossins has also included a great chapter lamenting the fact that the yellow jersey has been, mostly, a male-only garment. The women’s race for the maillot has gone a long way downhill since the inaugural 18-stage ‘Tour de France Féminin’, won by American Marianne Martin. Girls can dream of yellow too and so it’s a shame, and more than a little shameful, that the closest any woman can currently get to the jersey is becoming a podium hostess at the men’s event.

This really is a fantastic book, its design and content a more than fitting tribute to a transcendent icon and, much like the Tour de France itself, I really didn’t want it to end: turning the last page brought a similar disappointment to the end-of-summer sadness delivered by watching the last rider in the peloton cross the Champs Elyesees finish line.

Now that it’s done, I’ll put it onto its coffee-table plinth, dip into it every now and again to remind myself that, whilst riders come and go, yellow is forever.

One thought on “Review: The Yellow Jersey by Peter Cossins”